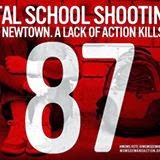 The horrific shooting at Marysville-Pilchuck High School on October 24, last Friday, raises the number of school shootings since Newtown to 87. That's 87 school shootings in less than 2 years. Not particularly encouraging.

According to CNN.com, the shooter, Jaylen Fryberg, a popular freshman, was recently named the school's homecoming prince.

Earlier that day, Fryberg texted a selfie with a gun to his ex-girlfriend, and he sent texts to several of his friends and to his cousin inviting them to sit at the same table with him for lunch in the cafeteria.

Zoe Galasso died and Jaylen Fryberg at the scene.  Gia Soriano died in the hospital, Sunday night. Shaylee Chuckulnaskit and Andrew Fryberg are in critical condition. Nate Hatch is in satisfactory condition.

The fact that Fryberg was popular and not an outsider or a victim of bullying doesn't fit the standard profile of a school shooter. Neither does his targeting his friends and family.

What is more disturbing to me is that once again, the shooter's gun was taken from a family member in his home. Washington State does not have child access prevention laws, which would hold the adult gun owner criminally liable, who did not properly store and lock up his gun. Approximately half the states have child access prevention laws. New York does not. Read here about the efforts being made to pass Nicholas's Bill: The Child Access Prevention or Safe Storage Act.

It is my great hope that one day in the not too distant future, all 50 states will have child access prevention laws.

Here is a good article by Gail Thomas (NY Times) about gun laws and the upcoming mid-term elections.