Here is a little bit about the lives of the 13 victims. I interviewed some of their parents, most of whom had already done many interviews with the media.

Active in church youth programs and Bible study groups. She was a member of West Bowles Community Church in Littleton. I interviewed the pastor there, Dave McPherson, and Cassie's father, Brad Bernall. Both men told me the story of Cassie's redemption. She was going down a very dark path, similar to that of the killers, and the her experience on a particular church youth group trip saved her. She found her faith in Christ, and became the happy, loving girl that was murdered in the library.

The Bernalls have written a book about Cassie's transformation called "She Said Yes." Accounts from students in the library said that one of the killers asked her if she believed in God. She said,"Yes", and they shot her in the head. This was disputed later in the official Columbine report. Other witnesses said it was injured survivor Valeen Schnurr who had said it. It was later reported that several students in the library were asked the question.

Here is an excerpt from my inteview with Brad Bernall in 1999. I spoke to him at West Bowles Community Church, the place that had changed Cassie's life:

"They released her to the funeral home and that was, uh, that was the first time we got to...See I'd called the funeral home and, um, you know, just told them that we needed to see Cassie. I said, you know, don't bother doing anything to her, you know, clean her up a little and then call us as soon as you can. Just do the very minimum so we can get over there and, and see her. And they did. And we, we finally got over the funeral home probably, it was after dark so it was probably about 8:00 or 8:30, and they led us to a room where, where Cassie was on a little gurney and, uh, they had washed her hair and put a towel over her hair, and she was just covered with a sheet. Um, and it was, she looked, she looked good. I expected, I expected the worst, you know, since she'd taken a shotgun shot to the head I expected just something awful. But it wasn't. Her face was intact and, um, she even had good skin color. I was so surprised. She looked good. But it's...I wanted to hold her and kiss her, and I did because it was so hard mostly because she was cold. She had been in a refrigerator and her body was so cold. Um, Misty came in, um, and touched her foot, her foot was sticking out, and when she felt the coldness of her foot she just dropped, right there, down to the floor. Just broke down and lost it, you know. It was difficult for both of us, but it was something we had to do. And the next few days we did as much as we could, um...I've always been a hands-on dad. I wanted to make sure that I was, I closed the coffin, I cut the locks of her hair off her head, um, did all that sort of thing. Misty and I both said our goodbyes at the funeral home like the day before the funeral, closed the lid, and that was, that was the last time we saw her. "

To learn more about Cassie's life and "She Said Yes", please go to the Bernall's website: www.cassierenebernall.org

Please go to the next post to read more about the Columbine victims.
Posted by Adina at 7:26 PM No comments:

10 years ago today, Eric Harris and Dylan Klebold shot and killed 12 classmates and a teacher, before killing themselves, at Columbine High School in Littleton, Colorado. 23 others were wounded.

It was one of the saddest days in recent U.S. history.

It forever marked a community and a nation.

And it changed the direction of my life.

I am grateful to all the members of the Columbine community who chose to speak with me in 1999-2000, especially the parents of the victims and the Columbine students, the survivors.

Today, let us remember the victims:


see this great article and others on www.denverpost.com 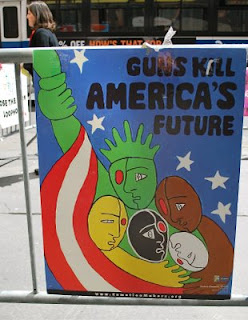 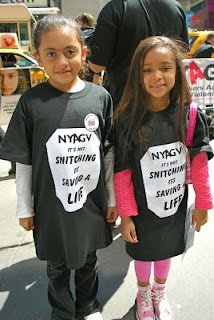 Here's a few more photos from the "lie-in".

Tomorrow, is the 10th anniversary of Columbine. I can't believe it's been 10 years. I never thought when I was doing my interviews back in 1999, that 10 years later I would still be performing my play, and sadly, needing to perform it, because very little has changed since then.

I did a run through rehearsal today for a performance I'm doing at City College on the 29th. It felt good to step inside the characters again, but it was also said think about what they went through. I hope they are in a much better place today.

Tonight, in Clement Park in Denver, at the Columbine Memorial, there will be a candlelight vigil for the victims and their families. see video.

My thoughts and prayers are with them.
Posted by Adina at 1:59 PM No comments: 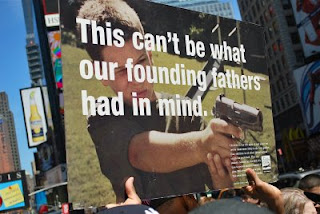 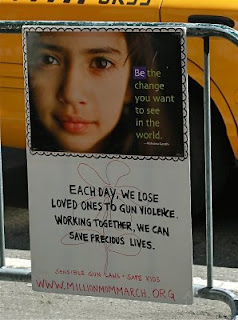 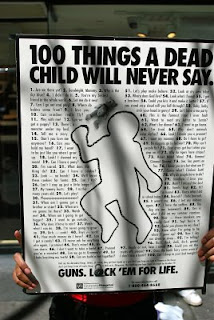 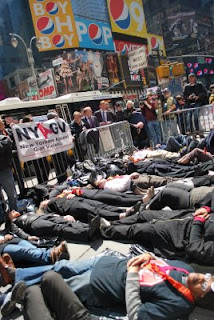 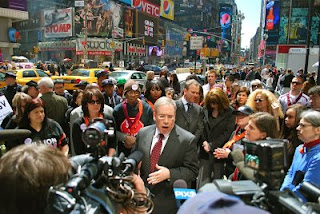 Today was an inspiring day. Very sad, yet inspiring. Blue skies over Times Square. Sunshine. Birds flying above the giant TV screens. The second anniversary of the Virginia Tech massacre. At noon, in front of the Marriott Marquis Hotel, I met up with 31 other people to protest easy access to guns in America. 32 of us formed two lines. We were all dressed in black, wearing orange and burgundy ribbons (the school colors for Virginia Tech). One at a time, we each read the name of a victim from a piece of paper we were given.

Then, I lay down on the sidewalk. I closed my eyes and listened to the names of the other victims being read, trying to imagine what their lives must have been like, and how their families must be feeling today. Students, professors, even a Holocaust survivor, all with so much to look forward to...

After all the names were read, we lay there in silence for three minutes, the amount of time it took for the Virginia Tech shooter, Seung-Hui Cho, to purchase his gun.

Three minutes. As long as it takes to buy a pack of gum.

The dealer ran a background check during those three minutes, which failed to reveal that Cho had a history of mental illness.

The event was organized by New Yorkers Against Gun Violence, assisted by Protest Easy Guns and Million Mom March.

The most moving moment for me was hearing the tragic stories of two moms from the Bronx, who had lost their sons to gun violence. Both young men were going about their daily lives, minding their own business, and they ended up in the wrong place at the wrong time, caught in the middle of gunshots intended for someone else. As she spoke of her son being murdered at a neighborhood party, one of the moms had tears rolling down her cheeks.

I didn't know what to say. What can you say, except, "I'm so sorry, " which always feels inadequate.

In both cases, the killers were never brought to justice, because no one in the neighborhood wanted to snitch.
The other mom told me, "There is no justice, and there is no closure. Even if the killer went to jail. He'll get out after 5 to 10 years, and it won't bring my son back."

Both of these moms are coping by working at a grassroots level to change things for the better in their communities.

What could me more inspiring than that?

It’s time.  I need to start a blog. Reach out to a bigger community.

On April 20th, 1999, at Columbine High School, Eric Harris and Dylan Klebold killed 12 classmates and a teacher, before killing themselves. They wounded 23 others. I, like so many Americans, was shocked and deeply disturbed watching the media coverage that horrible day. I felt I had to do something. So, I left New York City and flew out to Littleton, Colorado to talk to members of the community. I needed to know why this had happened. Over the span of a year, I made seven trips, and I spoke with more than 60 people, including injured students, a young woman who was friends with both the killers and one of the victims, the parents of the only black student who was murdered, police officers, the pastor at the scene, teachers, and reporters.

I titled my play, “A Line in the Sand” because I felt that, back in 1999, Columbine had finally gotten our attention about gun violence in America. A line in the sand had been drawn. Surely, Congress and the President would insist on sensible gun laws, close the gun show loophole on a federal level, and not allow the assault weapons ban to expire.  Surely, we would stop the madness and prevent more senseless deaths. We would protect our children.

We are just a few days from the 10th anniversary of Columbine. 10 years and more than 60 school shootings later, my question is: Have we learned anything? I am sad to say I don’t think we have.  We stepped right over the line in the sand. Bulldozed over it. This has become national crisis.  And most of us, including Congress, look the other way.  They have more urgent crises to deal with, and they are afraid of the NRA.

In his excellent article in the New York Times yesterday, Bob Herbert wrote, “Since Sept. 11, 2001 nearly 120,000 Americans have been killed in non-terror homicides, most of them committed with guns. That’s nearly 25 times the number of Americans killed in Iraq and Afghanistan. For the most part we pay no attention to this relentless carnage. So what if eight kids are shot to death every day in America. So what if someone is killed by a gun every 17 minutes.”

To end on a more positive note, I think the most important question we can now ask is, “What are we going to do, together, for all the children in this country?”

For my part, I will continue to perform my play in high schools, with the goals of stimulating dialogue, creating awareness, and preventing future school violence.

Since 1999, I have become a mother.  Twice. I have two beautiful daughters, Emma and Madeleine, 3 years and 11 months, respectively.  It is more important than ever to me that they grow up in a safer, less violent society, and that when they reach the age to attend college, their classmates and teachers won’t be allowed to bring concealed guns on campus for self-defense.

Tomorrow, April 16, I am participating in a “lie-in” protest in Times Square to mark the second anniversary of the Virginia Tech massacre.  32 people from around the New York area will lie down on the ground for three minutes in silence, the amount of time it took for the Virginia Tech shooter to purchase his gun.

What are you going to do?

I look forward to hearing from you.

To learn more about “A Line in the Sand”, please visit my website: