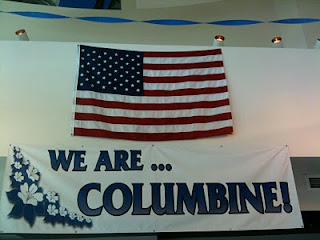 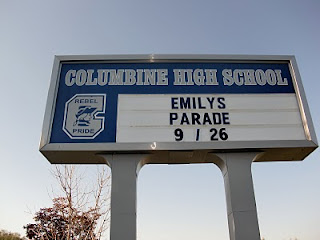 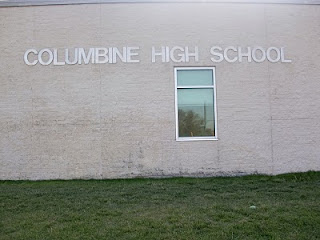 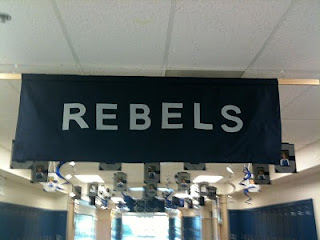 Well, it's not a major decade marker like last year, but to the family and friends of the 13 victims every anniversary of this horrible tragedy is painful and significant. My thoughts and prayers go out to them.

Let us remember the victims:

Let us also remember the 23 injured students and those that made it out of the library and alive and their families.

Especially the ones that I interviewed:

Richard Castaldo and his mother, Connie Michalik
Sean Graves and his mother, Natalie
Lance Kirklin and his father, Mike
Crystal Woodman and her mother, Cindy
Lindsay Elmore
Posted by Adina at 11:12 AM No comments: 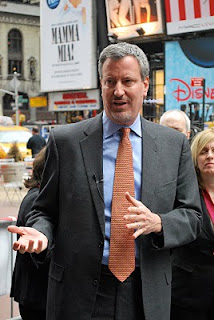 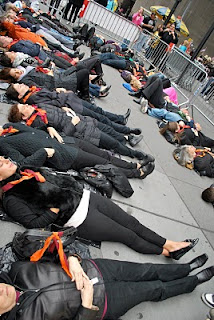 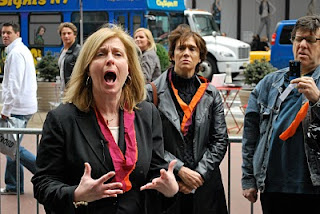 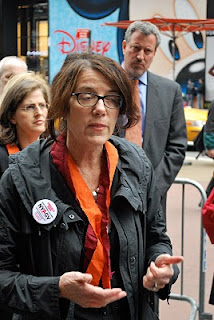 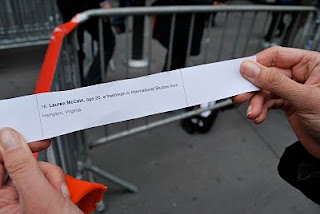 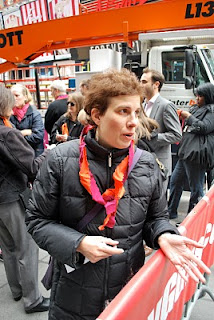 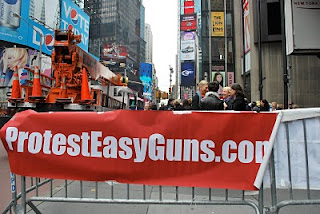 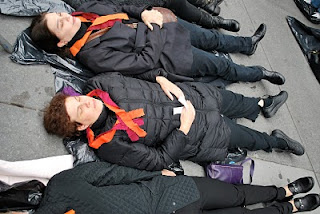 Today, for the 3rd year in a row. I went to the Lie-in in Times Square to protest the easy availability of guns, and to honor the victims of the Virginia Tech shootings.

32 of us wore black and sashes with the orange and maroon colors of Virginia Tech. We each read a name of one of the 32 victims and then lay down on the ground. I held a strip of white paper and read, "Lauren McCain, age 20, a freshman in International Studies from Hampton, Virginia." Then, I lay down on top of two garbage bags, sandwiched in between two other protesters. I looked up and the cloudy sky and the huge building above me, and then I closed my eyes to appear dead. The names continued to be read, until all 32 were completed and everyone was on the ground. We lay there in silence for 3 minutes, which is as long as it takes for a person to purchase a gun without a proper background check.

Lauren McCain was also planning on majoring in German. She mentioned two heroes on her MySpace page: Jesus Christ and her brother, Joel. She loved all music, except Country. She liked Sci-Fi movies. Her friend, Matt Croushorn, said, "She was a really nice person. She was smart. She was fun to talk to."

Several people spoke about the urgent need to create laws to stop the easy access to guns. Megan Meadows spoke first. She spoke eloquently about her friend, Reema Samaha, one of the 32 victims at Virginia Tech. Next up was Jackie Hilly, Executive Director of New Yorkers Against Gun Violence. She spoke about the need for passing legislation to require background checks on gun sales at gun shows, and she mentioned that her organization is pressing New York State to pass “microstamping” legislation that would help police in effectively tracing guns recovered in crimes. Then, NY City public advocate, Bill Belasio, spoke, echoing the need for tougher gun laws. And finally Michelle Schimel, member of the State Assembly from Long Island and sponsor of the microstamping bill, spoke passionately to the crowd, pleading for support to get the bill through.
Posted by Adina at 2:03 PM No comments: